Give me another word for it
You who are so good with words
And at keeping things vague
Because I need some of that vagueness now.—Joan Baez, Diamonds and Rust

Words fail us. Brussels, Dallas, Baton Rouge, Ankara, terrorism, racial hatred, military coup.  They are just words. Today they have no meaning, or if they do, it is too vague to discern.

So we replace all other words with one: fear. We are afraid of dark men in hoodies or government bureaucrats or immigrants or vaccinations or cameras in our computers that may switch on without notice. We are afraid of computer hackers in Pyongyang, or genetically modified corn or melting glaciers or people with semi-automatic weapons. We are afraid of Donald Trump getting his hands on the nuclear codes or Hillary Clinton getting her hands on our guns. We are afraid of old men in pulpits, young women in hijabs, mosquitoes that spread birth defects and transgendered people using the restroom stall next to us. We are afraid. 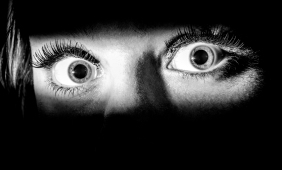 Fear seeps into our nostrils, our dreams, our food, our schools, our workplaces. Human resource departments schedule “Active Shooter Training” to minimize bloodshed in offices. “Run, Hide, Fight” has replaced “Look, Listen, Learn.” Fear ripples outward from our souls towards anyone or anything that is too different, too unassimilated, too religious, not religious enough.

Fear transforms us into a thing unrecognizable, a thing which hates, a zombie-thing, hungry for flesh and blood. In George Orwell’s 1984, he describes the Two Minute Fear, a mass exercise of xenophobia, which helps the Party control the people:

A hideous ecstasy of fear and vindictiveness, a desire to kill, to torture, to smash faces in with a sledge hammer, seemed to flow through the whole group of people like an electric current, turning one even against one’s will into a grimacing, screaming lunatic. And yet the rage that one felt was an abstract, undirected emotion which could be switched from one object to another like the flame of a blowlamp.

Two weeks ago, we hated and feared the police. Then we hated and feared Black Lives Matter. Then we hated and feared Muslims in France. Then deranged ex-Marines in Louisiana. There is no Party directing our fear, we ourselves are now stoking our internal engines of hate and fear. We are plugged into the Great Fear and it is leading us to a precipice. We want leaders who will “do something” to stop terrorism, no matter what it is. We are willing pay any price, bear any burden, meet any hardship, not in order to assure the survival and the success of liberty, but to just make these bad feelings go away.

In 1933, the USA stood at the edge of a precipice far steeper and more treacherous than this one. All our political institutions had crumbled, save one, the Presidency. At the edge of that precipice stood FDR, a leader as flawed as any other, but who understood that turning things around meant snuffing out the flames of fear. In his Inaugural Address he said:

This is preeminently the time to speak the truth, the whole truth, frankly and boldly. Nor need we shrink from honestly facing conditions in our country today. This great Nation will endure as it has endured, will revive and will prosper. So, first of all, let me assert my firm belief that the only thing we have to fear is fear itself—nameless, unreasoning, unjustified terror which paralyzes needed efforts to convert retreat into advance.

We cannot and should not minimize the dangers of terrorism, tribalism, nationalism, xenophobia, racial enmity and social injustice. Any of them or all of them could destroy us. But we cannot conquer any of them unless we first face our fear and conquer it.

Writing and Activism by P.L. Thomas