To the Emperor Caesar Flavius Constantinus, the greatest, pious, and blessed Augustus: because he, inspired by the divine, and by the greatness of his mind, has delivered the state from the tyrant and all of his followers at the same time, with his army and just force of arms, the Senate and People of Rome have dedicated this arch, decorated with triumphs.—Inscription on the Arch of Constantine, A.D. 315

She fiddled with her wine glass, twirling it, and finally, sipping it slowly. “I really wanted to go to a church today. A week before this election, I needed a word of comfort, something that would explain the anxiety I’m feeling and give me a reason to hope. But in the end, I knew that all I would get was religious nonsense set to music. So I went out for a run instead.”

I sat there on Sunday night, in my neighbor’s home, talking with his friend, helpless to defend the Christian Church in America. For there is no defense now. There is no explanation for the support and comfort—indeed, the cover—that Christians have given to Donald J. Trump.

According to PRRI (a research group focusing on religious thought and behavior) “white mainline Protestant voters are split between the two candidates with an equal number supporting Trump (42%) and Clinton (42%). White Catholic voters are closely divided with roughly equal numbers in favor of Clinton (46%) and Trump (42%). Clinton leads Trump among all Catholic voters (55% vs. 34%, respectively) and among unaffiliated voters (70% vs. 20%, respectively) by considerable margins.”

This means that a substantial plurality, if not a majority, of Americans who claim to be followers of Jesus of Nazareth are planning to cast their vote for a man whose every utterance and action is antithetical to Christian ethics. Apparently they believe that Trump will appoint Supreme Court justices that are opposed to Roe v. Wade and that he will restore American prestige and honor in a world that no longer looks to the U.S.A. to lead. Whether or not Trump wins in next week’s election, they have irreparably compromised Christianity itself and the contempt with which my neighbor’s friend and millions of other people feel for the Church will grow. The Great Secularism will continue to eat away at the crumbling marble façade of American Christianity.

This moment in American history is not a moment without precedent. In the fourth century, Christianity had to make a choice like this. And it made the wrong one.

Reeling from official persecution under Diocletian, the Church cast its lot with a man whose goal was to restore the greatness of the Roman empire, which was falling apart, assailed by enemies within and without. Constantine cemented his place in history on a bridge over the Tiber.

It was October 28, 312. Constantine’s 40,000 troops were advancing on Rome, where his rival Caesar, Maxentius was holed up, with an army at least three times as large. Religion would be central to the battle. Maxentius, dutiful child of the gods, consulted the Sibylline Oracle, and was told that on that fateful day “an enemy of the Romans will perish.”

Across the river, his relative and fellow child of the gods, looked to Sol Invictus, the god of the sun. There, blazing above the yellow orb, Constantine saw a shining cross and the Greek words: “ Ἐν Τούτῳ Νίκα,” “in this sign, conquer.” (The Constantinian mythology renders the words as the Latin ‘”in hoc signo vinces” but contemporary accounts present it in Greek.) He ordered his troops to make crosses on their shields and attack. 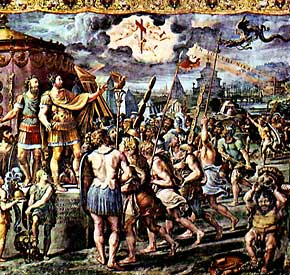 They met at the Milvian Bridge, and while it’s not clear exactly what happened next, (either the bridge collapsed or a pontoon bridge built for the troops to cross after the stone bridge had been destroyed sank), but Maxentius drowned in the Tiber and his troops were defeated after two days of bloody hand to hand to combat.

Constantine entered the city in triumph, and secured his power over the Western Empire. He proceeded to issue executive orders undoing every one of Maxentius’ policies, at least those he did not simply co-opt. The following year, he issued the Edict of Milan, which granted legal status to Christianity. The Church rejoiced, their man had triumphed under their sign, and within a few decades, Christianity would be declared the religion of the Empire, so that Christians could now persecute those who once persecuted them. An eye for an eye, as the Bible says.

Constantine’s appropriation of Christianity continued, as Christians continued to do what they always do: fight over theology. In 325, as arguments over the deity of Jesus threatened to split apart Constantine’s hard-won imperial unity, he ordered all the bishops of the Church to Turkish city of Nicaea to solve the problem once and for all, declaring himself an Archbishop. The Council of Nicaea, eventually came up with the Nicene Creed, declaring that Jesus was “Light from Light, True God from God, begotten not made,” and banished all who dared oppose that view. The official historian of the Council, Eusebius, described the Emperor’s entry into the chamber: He “proceeded through the midst of the assembly, like some heavenly messenger of God, clothed in raiment which glittered as it were with rays of light, reflecting the glowing radiance of a purple robe, and adorned with the brilliant splendor of gold and precious stones.”

Christianity in America faces its Constantine moment, as its fawning acolytes gaze on their candidate arrayed “like some heavenly messenger of God.” This will not end well for them, nor for us.

2 thoughts on “The Constantine Moment”

Student of Life. Advocate for serious joy in Christ.

Thanks for the memories and the new adventures.