The patrones threw them a big party with empanadas and lots of wine, barbecued a few cows specially slaughtered for the occasion, serenaded them with songs accompanied on the guitar, beat them over the head with a few political harangues, and promised them that if the conservative candidate won the election they would all receive a bonus, but that if he lost they would lose their jobs. In addition, they rigged the ballot boxes and bribed the police.—Isabel Allende, The House of the Spirits

The election was rigged, with the outcome so thoroughly agreed upon by the Establishment, that there could be no other. And yet, as the returns came in, the people had repudiated the power structure that ruled the nation. There would be a new President, and he was not what Chilean conservatives and their American backers had worked for.

So, according to its own website, the CIA undertook “sustained propaganda efforts, including financial support for major news media, against Allende and other Marxists. Political action projects supported selected parties before and after the 1964 elections and after Allende’s 1970 election.” On the orders of U.S. President Richard Nixon, the CIA supported a coup against the new Chilean President, Salvador Allende. As the military descended on the Presidential Palace, Allende committed suicide. At least that’s the official story. In Chile, they still call it an assassination. 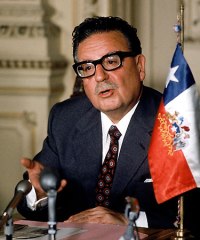 That was not the first (or the last) time that the USA had interfered in an election. There was Iran in 1953, Guatemala in 1954, Congo in 1960, the Dominican Republic in 1961, South Vietnam in 1963, and Brazil in 1964. Let’s not forget Iraq and Afghanistan, where U.S. backed governments were installed after winning elections. Oh, and there was Cuba, where there were both disastrously bungled military invasion and assassination attempts but that’s still a CIA work in progress, which will continue under the next U.S. President, Donald J. Trump.

The irony now is that the American President-elect will be taking office after the CIA, the NSA and the FBI have determined that the Russian government attempted to influence the November 8, 2016 election. They did it by hacking into the email servers at the Democratic National Committee and the private emails of key Clinton aides and other Democrats running for office and providing them to Wikileaks and D.C. Leaks. The President-elect dismisses all of this of course, since to acknowledge it would be tantamount to an admission that he did not, after all win in a landslide, a fable he and his entourage continue to recite.

And the irony continues: Wikileaks, once viewed with horror by the American Right, is now touted as “doing the job the MSM won’t,” by such GOP stalwarts as South Carolina Congressman Jeff Duncan. On Fox News, Rightist favorite Sean Hannity is calling for Wikileaks founder Julian Assange to be “freed” from his hideout in the Ecuadoran embassy in London. This is quite a change for conservatives from 2010, when NY GOP Congressman Pete King demanded that Wikileaks be classified as a terrorist organization and that Assange be tried under the Espionage Act.

In response, the American Left is now working itself into a paroxysm of outrage over the Russians and their cloak and pointer spy games, with an insistent cry that “Russia hacked the election.” The truth is, the election was not hacked. Hillary Clinton’s emails were not hacked, though those of many of her team and her key supporters were.

The daily drip of her associates’ leaked emails and the conflation with those leaks of her private home email server in the minds of voters was enough to tip the election to Donald Trump. Clinton had many failings as a candidate: she was evasive, she was too much head not enough heart, she did not even try to identify with Trump’s followers, dissing them (okay, half of them) as deplorable. But none of those alone could have stopped the Clinton juggernaut. Only if enough of her potential supporters stayed home, and enough of Trump’s showed up, in just the right combination in all the right places could the inevitability of President Hillary Clinton be undone. And that’s exactly what happened on November 8.

The final and fatal damage to Hillary Clinton’s candidacy was the result of a cleverly managed propaganda campaign, orchestrated by Russia, in collusion with the Republicans, aided and abetted by the media and its hunger for ratings. The election was not hacked. Truth was hacked. Reality was hacked. We were hacked.

Donald Trump will take office on January 20 with the whiff of illegitimacy around him, and that is not good news. His narcissism and insecurity will be a very real danger to both the U.S.A. and the rest of the world. At home, he is likely to attack those who stand up to him and abroad, he is likely to engage disastrously with allies and foes alike. It’s too late to stop Donald Trump from being President. Now, we must stop him from hacking us for the next four years.

One thought on “The Election Was Not Hacked, Truth and Reality Were Hacked.”

Student of Life. Advocate for serious joy in Christ.

Come view the world from my loft