“A historic movement, the likes of which the world has never seen before.” That’s how Donald John Trump, the 45th President of the USA, described his victory in his inaugural address. He looks out over the land he now rules, and sees a dystopia, an “American carnage,” of “mothers and children trapped in poverty in our inner cities; rusted out factories scattered like tombstones across the landscape of our nation; an education system flush with cash, but which leaves our young and beautiful students deprived of all knowledge; and the crime and the gangs and the drugs that have stolen too many lives and robbed our country of so much unrealized potential.” It is a dark and dangerous wasteland, whose dispossessed citizens turned their backs on a political elite and chose the only man who can save them from the abyss. 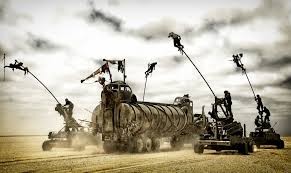 Trump’s Mad Max America was devastated by a slow-motion war on “the forgotten people,” strangled by high taxes, government regulations, free trade agreements, hordes of illegal immigrants stealing all the good jobs and greedy corporate overlords moving what was left to the ends of the earth. He stands now, a Colossus astride the continent, to bring freedom and prosperity to a once great nation.

No matter that crime rates are actually down, (Chicago’s gang war the lone big city exception), that employment is higher than it has been in more than a decade, that wages have begun to rise, that productivity hit an all time high in the 3rd quarter of 2015 and remains statistically unchanged, that illegal immigration is at its lowest point in a generation. If you are frightened of your neighbors, unemployed or underemployed, deeply in debt and struggling to pay your bills, you feel like one of the forgotten people, and the new President is here to save you.

There are several ways to view Trumpism, each of them cynical in its own right. One is that it is a nativist-racist, neo-fascist movement, aligned with authoritarian enemies, foreign and domestic. Another is that it is a genuine populist rebellion, a Sixth Estate ready to storm the Bastille, institute a new Declaration of the Rights of Man and of the Citizen,  and lay waste to the Ancien Régime.

But there is another view, perhaps the most cynical of all: Trumpism is merely a marketing campaign by the Republican Party, to complete its total control of the American government. Wrapped in revolutionary fervor, stoked with the fires of discontent, Trumpism is only a façade behind which the GOP power structure will calmly reinstate the Neo-Conservative New American Century, temporarily derailed by the upstart Barack Obama. Trump will be the Illusionist onstage, pulling rabbits out of hats and sawing beautiful girls in half to the cheers of the rallied crowd, while behind the black curtain, there will be a stripping of the legislative altar, and its anointing with oil and coal tar. It will look like Good Friday to the Left, Easter to the Right, but in the end, the forgotten people will be ever more bereft of hope and opportunity. The American Carnage will then be complete.

The danger for the GOP, of course, is that its creation is unstable. Trump believes in nothing so much as himself. His narcissism, solipsism and insecurities could spill out of his hastily built cage and explode, immolating the party, the nation and the world.

The next four years will determine which of these Trumpisms will endure, for the movement contains the seeds of them all. One thing is certain, on this Day 2 of America First: the next four years will be unlike any in the history of the American Republic. We are inextricably bound up with a President unlike any before him, who believes, as much as he believes in anything at all, that he alone is our voice, that he alone can fix what is broken, that he alone is the answer. That is a dark and dangerous state for us all. At least we can agree with Donald Trump on something.

One thought on “American Carnage: Which Trumpism Will Endure?”

From Sunrise County to the Universe