If you really need something else to scare you, here it is: you really can die of a broken heart. According to the American Heart Association, a broken heart is a thing: a part of your heart enlarges and doesn’t pump well, while the rest of your heart functions relatively normally or contracts with a force that can rip the muscles apart.

It’s hard to detect, because its symptoms look nearly like a heart attack, except there are no blocked arteries. Broken heart syndrome seems to be caused by an unusual level of stress that leads to a massive release of stress hormones. It usually follows some traumatic event: the unexpected death of a loved one, in the midst of a breakup, a business crash, or sometimes, even following some good news, like winning the lottery. That last one would particularly suck. 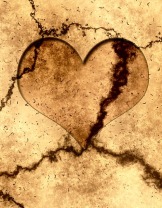 When your heart breaks, the weight of the universe presses in on you, and it’s all you can do to force the air in and out of your lungs, each breath feels like a sharp blade, twisting between your ribs, and you can feel yourself dying, moment by hellish moment.

So, why would anyone want a broken heart? If you’ve ever had your heart broken, and let’s face it, each of us has, you never want that kind of pain again. Death is preferable.

But there it is, in the Lenten liturgy: the coda of Miserere mei Deus, which, according to the Hebrew tradition, was the poem composed by King David of Israel, when his adultery with Bathsheba was exposed. David had, if you know your Leonard Cohen, seen “her bathing on the roof, her beauty and the moonlight overthrew” him. So, yeah, they slept together, she got pregnant and when her soldier husband came back on leave from the front, David tried to arrange it so that the guy would go home and have sex with his wife and think the kid was his. But Uriah, who was both a Hittite immigrant and an Israeli army officer, wasn’t going home to grab a piece when his guys were off fighting a damned hard war. So David let him go, and then ordered his general to send him to the front, and pull back, letting the slings and arrows of the Ammonite army do what slings and arrows do.

So Yahweh tells David that he’s going to kill the child that will soon be born and in the punishing bonus round, blow up his family, and tear his kingdom apart. In response, David composes a brilliant poem to broken heartedness. In the final verse, he cries:
The sacrifice of God is a troubled spirit;
a broken and contrite heart.
No wonder people preferred to worship Ba’al or Molech, who, though they occasionally wanted a child or two sacrificed in order to make it rain, at least wouldn’t destroy your life’s work because you slept with some other guy’s wife.

If you survive broken heart syndrome, and most people do, you find out that your heart heals, mostly. David and Bathsheba went on to have one of Israel’s most passionate and famous marriages, and their next child grew up to become the king who would create the Jewish Golden Age, Solomon. But broken hearts, even healed ones, leave scars behind, though they are mostly scars of memory: the soft days of love, the deep fires of night, the songs you sang together, the wine you sipped, the way the sun filtered through the window the first time you woke up next to your lover—gone, all gone. Somehow though, if you’re willing to walk through that kind of sacrificial suffering, you will be healed. The Sufi poet Rumi put it like this:

Don’t turn your head. Keep looking at
the bandaged place. That’s where the
light enters you.
And don’t believe for a moment
that you’re healing yourself.

If you can let the brokenness heal, it will likely leave a hole in your heart. But that’s where the light enters. Don’t turn your head.

Writing and Activism by P.L. Thomas