She is often blindfolded, holding a sword with her right hand and a set of scales with her left. She is an ancient, from worlds long ago, when Gods came down to live among humans. She is Lady Justice, and her images adorn courthouses and legislative buildings across the world. The blindfolds mean that she is impartial, not looking at who is being judged, but what they have done. The scales symbolize the restoring of that which is lost: the balance between rig 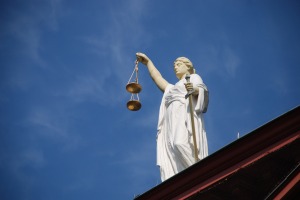 ht and wrong. And the sword? It is to enforce righteousness with power. A Mighty God, indeed.

Marble Gods may be beautiful, but, like every other Divine representation, they are pretty easy to ignore. Marble is a just a rock after all, as suitable for floors to walk upon or countertops on which to slice onions, as for fashioning objects of devotion. Justice is both everywhere and nowhere.

We have a saying that “justice will be done,” if not before, then after a court intervenes. But what if it isn’t done? What if the court itself is an instrument of injustice? What if the law being enforced with the Sword of Justice is actually a law devoid of justice, a law that does not restore but reinforces a state of injustice? What is the standard by which we judge the judgments of the judges themselves?

There are three things which must guide us: the lifting of oppressive yokes from the necks of the suffering and the weak, restoration of the balance of Creation, and an enforcement mechanism that keeps it that way. If a court says, for instance, that some people have no rights, and thus are not people, but property, and can be bought and sold like any other piece of property, that can only be considered an unjust ruling. That actually happened 160 years ago, when the U.S. Supreme Court, in Dred Scott v. Sanford, that black people were not ever, nor ever could be, citizens of the United States, despite the fact that black men (but not women) had been full citizens in five of the original 13 States when the Constitution was adopted in 1789. The ruling was enforced with the Sword and the U.S.A. was shortly plunged into “a Great Civil War, testing whether this nation, or any nation so conceived and so dedicated can long endure.” It nearly ended.

Dred Scott did not lift the yoke of oppression, it did not restore the balance of Creation, and it hijacked the power of the Executive branch to maintain human trafficking. It cost the lives of 600,000 people to overturn that unjust Court ruling. Injustice, like justice itself, is not cheap. Swords wielded draw blood.

Justice must be done: it is both noun and verb, requiring understanding and action. It may require blood. It may be a long way off. The abolitionist preacher Theodore Parker, writing in the 1850’s of a nation which was failing at equality for all, said: “I do not pretend to understand the moral universe; the arc is a long one, my eye reaches but little ways; I cannot calculate the curve and complete the figure by the experience of sight; I can divine it by conscience. And from what I see I am sure it bends towards justice.” Martin Luther King would later paraphrase Parker :”How long? Not long, because the arc of the moral universe is long, but it bends toward justice.”

Lent offers us an opportunity to meditate on the arc of justice and learn that justice will be done, however long it takes and however much it costs.

From Sunrise County to the Universe